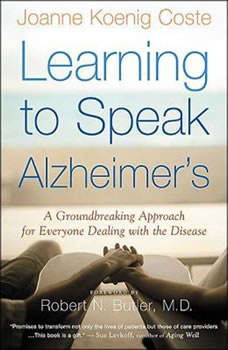 Learning to Speak Alzheimer's: A Groundbreaking Approach for Everyone Dealing with the Disease

More than four million Americans suffer from Alzheimer's, and as many as twenty million have close relatives or friends with the disease. Revolutionizing the way we perceive and live with Alzheimer's, Joanne Koenig Coste offers a practical approach to the emotional well-being of both patients and caregivers that emphasizes relating to patients in their own reality. Her accessible and comprehensive method, which she calls habilitation, works to enhance communication between care partners and patients. By meeting the patients in their own reality, rather than trying to force them to comply with a world they may no longer inhabit, we are able to respond in a way that brings satisfaction and even joy to both patients and caregivers.

For anyone worried about any type of brain ailment, ranging from the chronic conditions to simple brain fog and fatigue, this essential guide covers the full spectrum of prevention to treatment.We've all experienced brain fog—misplaced keys, f...

The Environmental and Genetic Causes of Autism
by James Lyons-Weiler, PhD

The Environmental and Genetic Causes of Autism delves deep into the full body of past and current research to reveal how genetic predispositions and environmental factors can combine to produce the conditions autism and autism spectrum disorders (A...