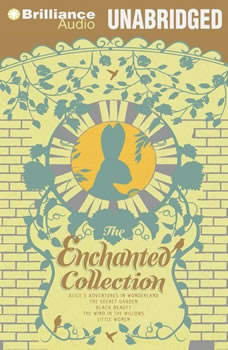 The Enchanted Collection: Alice's Adventures in Wonderland, The Secret Garden, Black Beauty, The Wind in the Willows, Little Women

This beautifully packaged set includes five classic masterpieces. Each exquisitely bound volume features charming four-color illustrations, a ribbon marker, and gorgeous design elements throughout. Housed in a keepsake slipcase with a magnetic closure, it’s a collection meant to be cherished for a lifetime. Readers set out with timid Mole as he explores the world, learning about courage and friendship through a series of misadventures with Rat, Toad, and Badger in The Wind in the Willows. From the River Bank, tumble down the rabbit hole with Alice to a madcap world where nonsense rules in Alice’s Adventures in Wonderland. From Victorian England, it’s on to a small New England town in Little Women, where Jo March and her three sisters struggle to achieve their dreams amid the shifting roles of women in the Civil War era. Sent to live with her uncle, orphan Mary Lennox uncovers the mysteries of Misselthwaite Manor in The Secret Garden. Readers then journey through the English countryside and London with a gentle, hardworking horse who experiences kindness and cruelty at the hands of different masters in Black Beauty. Whether encountering these cherished tales for the first or the fiftieth time, readers will find enchantment in this collection. Product Features:      • Embossed slipcase with magnetic closure      • Five hardcover volumes each featuring a ribbon marker and four-color illustration throughout

The Enchanted Collection: Alice's A...
The Heirloom Collection