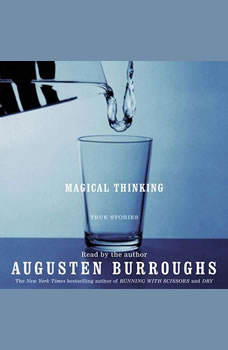 From the number-one bestselling author of Running with Scissors and Dry comes Augusten Burroughs's most eagerly anticipated collection yet: true stories that give voice to the thoughts that we all have but dare not mention.It begins with a Tang Instant-Breakfast Drink television commercial:"Yes, you, Augusten. You were great. We want you." I can now trace my manic adult tendencies to this moment. It was the first time I felt deeply thrilled about something just a fraction of an instant after being completely crushed. I believe those three words "We want you" were enough to cause my brain to rewire itself, and from then on, I would require more than other people....- from Magical Thinking's "Commercial Break"A contest of wills with a deranged cleaning lady. The execution of a rodent carried out with military precision and utter horror. Telemarketing revenge. A different kind of "roof work." Dating an undertaker who shows up in a minivan. This is the fabric of Augusten Burroughs's life: a collection of true stories that are universal in their appeal yet unabashedly intimate, stories that shine a flashlight into both dark and hilarious places. With Magical Thinking, Augusten Burroughs goes where other memoirists fear to tread.

Welcome to the hilarious, strange, elegiac, outrageous world of David Sedaris. In Naked, Sedaris turns the current mania for the memoir on its proverbial ear, mining the exceedingly rich terrain of his life, his family, and his unique worldview, a ...

A self-proclaimed candy fanatic and lifelong chocoholic, traces the history of some of the much-loved candies from his youth, describing the business practices and creative candy-making techniques of some of the small-time companies producing the ad...

I have read most of Augusten Burroughs books and they are all enjoyable. I think he has a good style of writing that is easy to read. His stories are funny. I was sad when the book ended, I could have read on and on without growing tired of this book.

This collection of vignettes is filled with gay cliches. There is the predictable scene of the gay man standing on his bathroom sink because he's found a small mouse trapped in his bathtub. This is followed by the most pathetic and sadistic description of killing a mouse that you could ever have the misfortune to read - it is clearly supposed to be humorous and it isn't. The other stories include predictable complaints about the short-comings of most gay men and other forgettable and all too familiar situations. Listen to 'Dry' or 'Running with Scissors'. They are much more original and, while Burroughs is just as self-absorbed as he is here, he at least exhibits some endearing qualities in those two novels/memoirs.