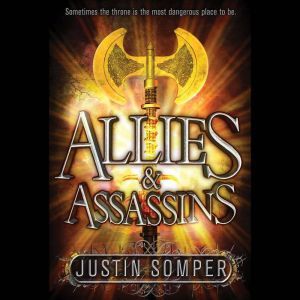 Sixteen-year-old Jared is the newly crowned Prince of All Archenfield, ascending the throne after his older brother's mysterious death. But Jared feels reluctant and unprepared to rule the Princedom and its dangerous and powerful court. Like each Prince of All Archenfield before him, Jared must rely on the Council of Twelve to advise him. But he knows he can just as easily be at their mercy--especially when it appears that one of the Twelve might have orchestrated his brother's untimely death. Propelled by his rage over the loss of his brother and wary of all his advisors, Jared can trust only Asta: a clever, strong-willed girl from the settlements, currently serving as the Physician's apprentice. Asta and Jared take it upon themselves to hunt down his brother's assassin--though the assassin may be hunting them, as well. Murder, betrayal, and intrigue abound in Justin Somper's thrilling YA series debut. Exploring the political machinations of the medieval-esque court and the lives that hang in the balance, Allies & Assassins is a gripping tale of a teen torn between duty and revenge.