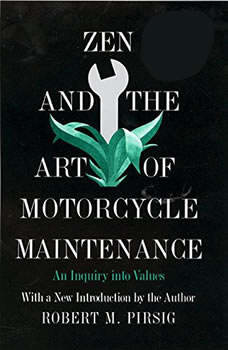 Zen and the Art of Motorcycle Maintenance: An Inquiry Into Values

This lyrical, evocative, thought-provoking journal of a man's quest for truth -- and for himself -- has touched and changed an entire generation. At its heart, the story is all too simple: a man and his son take a lengthy motorcycle trip through America. But this is not a simple trip at all, for around every corner, through mountain and desert, wind and rain, and searing heat and biting cold, their pilgrimage leads them to new vistas of self-discovery and renewal.Zen and the Art of Motorcycle Maintenance is an elemental work that had helped to shape and define the past twenty-five years of American culture. This special audio edition presents this adventure in an exciting new way -- for the millions who have already taken this journey and want to travel these roads again, and for the many more who will discover for the first time the wonders and challenges of a journey that will change the way they think and feel about their lives.

Zen in the Martial Arts
by Joe Hyams

A man who has attained mastery of an art reveals it in his every action.Samurai maxim Under the guidance of such celebrated masters as Ed Parker and the immortal Bruce Lee, Joe Hyams vividly recounts his more than twenty-five years of experience in...