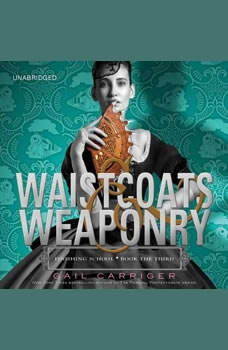 Class is back in session...Sophronia continues her second year at finishing school in style--with a steel-bladed fan secreted in the folds of her ball gown, of course. Such a fashionable choice of weapon comes in handy when Sophronia, her best friend Dimity, sweet sootie Soap, and the charming Lord Felix Mersey stowaway on a train to return their classmate Sidheag to her werewolf pack in Scotland. No one suspected what--or who--they would find aboard that suspiciously empty train. Sophronia uncovers a plot that threatens to throw all of London into chaos and she must decide where her loyalties lie, once and for all. Gather your poison, steel tipped quill, and the rest of your school supplies and join Mademoiselle Geraldine's proper young killing machines in the third rousing installment in the New York Times bestselling Finishing School Series by steampunk author, Gail Carriger.

Stay tuned for a brand-new show coming in winter 2018 to PBS Kids: Pinkalicious & Peterrific!Pinkalicious decides to get school lunch for the first time, but has she bitten off more than she can chew?#1 New York Times bestselling author Victori...

The Wanderer
by Sharon Creech

The sea, the sea, the sea. It rolled and rolled and called to me. Come in, it said, come in.Thirteen-year-old Sophie is the only girl amongst the crew of The Wanderer, made up of her three uncles and two cousins. They sail across the Atlantic toward...

The Vacation
by Polly Horvath

From the author of the Newbery Honor Book Everything on a WaffleWhen his mother decides on a whim to be a missionary in Africa and drags his unwilling father with her, Henry is left in the care of his Aunts Magnolia and Pigg. Henry’s sure they...

What if John Henry had a son?Twelve-year-old Ray is haunted by the strangest memories of his father, whom Ray swears could speak to animals. Now an orphan, Ray jumps from a train going through the American South and falls in with a medicine show tra...

Josie Byrne's life is spiraling out of control. Her parents are divorcing, her boyfriend, Nick, has grown distant, and her physics teacher has it in for her. When she's betrayed by the two people she trusts most, Josie thinks things can'...

Sixteen-year-old Molly Dix has just discovered that her biological father is Brick Berlin, world-famous movie star and red-carpet regular. Intrigued (and a little terrified) by her Hollywood lineage, Molly moves to Los Angeles and plunges headfirst...

Sometimes life gets messy.After a rocky start in Spoiled, Brooke Berlin and her newly discovered half sister, Molly Dix, have settled into something like sisterly love, but the drama is far from over.Now that Brooke's caught a taste of fame and her...