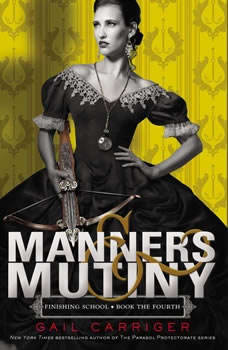 If one must flirt...flirt with danger.Lessons in the art of espionage aboard Mademoiselle Geraldine's floating dirigible have become tedious without Sophronia's sweet sootie Soap nearby. She would much rather be using her skills to thwart the dastardly Picklemen, yet her concerns about their wicked intentions are ignored, and now she's not sure whom to trust. What does the brusque werewolf dewan know? On whose side is the ever-stylish vampire Lord Akeldama? Only one thing is certain: a large-scale plot is under way, and when it comes to fruition, Sophronia must be ready to save her friends, her school, and all of London from disaster--in decidedly dramatic fashion, of course.What will become of our proper young heroine when she puts her years of training to the test? Find out in this highly anticipated and thrilling conclusion to the New York Times bestselling Finishing School series!