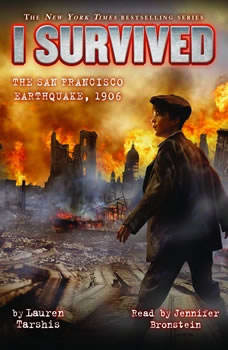 I Survived #05: I Survived the San Francisco Earthquake, 1906

The terrifying details of the 1906 San Francisco earthquake jump off the page! Ten-year-old Leo loves being a newsboy in San Francisco -- not only does he get to make some money to help his family, he's free to explore the amazing, hilly city as it changes and grows with the new century. Horse-drawn carriages share the streets with shiny new automobiles, new businesses and families move in every day from everywhere, and anything seems possible. But early one spring morning, everything changes. Leo's world is shaken -- literally -- and he finds himself stranded in the middle of San Francisco as it crumbles and burns to the ground. Does Leo have what it takes to survive this devastating disaster? The I SURVIVED series continues with another thrilling story of a boy caught in one of history's most terrifying disasters!