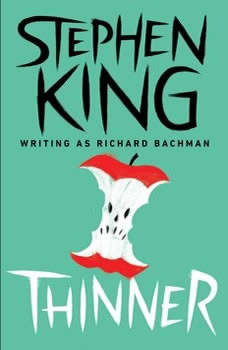 The “extraordinary” (Booklist) novel of one man’s quest to find the source of his nightmare and to reverse it before he becomes…nothing at all. This #1 national bestseller from Stephen King, writing as Richard Bachman, “pulsates with evil…it will have you on the edge of your seat” (Publishers Weekly).Billy Halleck, good husband, loving father, is both beneficiary and victim of the American Good Life: he has an expensive home, a nice family, and a rewarding career. But his is also fifty pounds overweight, heading, as his doctor says, into heart attack territory. One day, in a moment of carelessness, Billy sideswipes an old gypsy woman as she is crossing the street. The woman dies, but Billy has connections and gets off with a mere slap on the wrist. After the trial, the victim’s ancient father curses him with a single word: “Thinner.” Shedding weight by the week, Halleck is desperate enough for one last gamble…one that will lead him to a nightmare showdown with the forces of evil melting his flesh away. Beginning in suburban Connecticut and climaxing in rural Maine, this is a novel of unrelenting terror and growing horror as well as a nightmarish allegory about what lies beyond the limits of American complacency—and the responsibilities of human actions. With an introduction by Stephen King on “The Importance of Being Bachman,” Thinner oozes “undeniable suspense” (The Atlanta Journal-Constitution) and “genuine chills” (Kirkus Reviews).