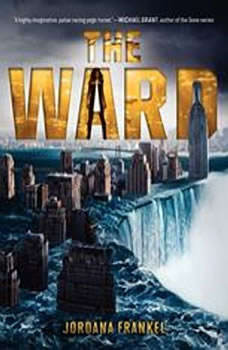 Set in a futuristic New York City after a catastrophic flood called the Wash Out, The Ward is the story of sixteen-year-old Renata Dane, a daredevil champion racer who will risk everything she has to take care of her sick foster sister, Aven.Ren's sister is suffering from the Blight, an incurable, deadly illness thought to be caused by years of pollution. The disease is ripping through the Ward—formerly known as downtown Manhattan—and since the region is home to the poor and the vagrant, little is being done to help the sick.But when the Blight somehow spreads to the affluent Upper Islets, the government recruits Ren for a secret mission: to search for a freshwater source in the Ward, with the hope of it leading to a cure. She is the only girl in the Ward to master helming a mobile—a car that can defy gravity and drive up the walls of a skyscraper, or transform into a high-speed boat at the push of a few buttons.However, when Ren accepts this job—and the big paycheck that comes with it—she never expects that it will lead her to dangerous encounters with a passionate young scientist, a web of deceit and lies, and a confounding mystery that's lurking deep beneath the water's rippling surface.Cinematic and thrilling, The Ward is Jordana Frankel's debut novel.