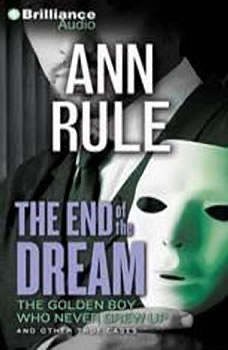 The End of the Dream: The Golden Boy Who Never Grew Up and Other True Cases

An explosive account of lethal greed and twisted desire from the files of America's #1 true crime writer, Ann Rule.They were best friends, four talented and charismatic young men who lived charmed lives among the evergreens of Washington state: Kevin, the artist; Steve, the sculptor; Scott, the nature lover and unabashed ladies' man; and Mark, the musician and poet. With their stunning good looks, whip-sharp minds, athletic bodies—and no lack of women who adored them—none of them seemed slated for disaster.But few knew the reality behind the leafy screen that surrounded Seven Cedars, Scott's woodland dream home—a tree house equipped with every luxury. From this idyllic enclave, some of these trusted friends would become the quarry for a vigilant Seattle police detective and an FBI special agent, who unmasked clues to disturbing secrets that spawned murder, suicide, million-dollar bank robberies, drug-dealing, and heartbreaking betrayal. When the end came in a violent stand-off, the ringleader of the foursome—the fugitive dubbed "Hollywood" for his ingenious disguises and flawless getaways; the persuasive talker who turned his friends into accomplices—faced a final chapter no one could have predicted. In a blast of automatic gunfire, the highest and lowest motives of the human heart were, at last, revealed.Along with two other true-crime tales,The End of the Dream is a masterful and compelling tour of the criminal mind from Ann Rule.

The End of the Dream: The Golden Bo...
Ann Rule's Crime Files #5