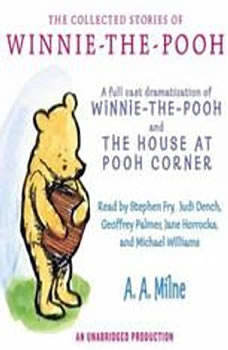 The Collected Stories of Winnie-the-Pooh

WINNIE-THE-POOH
POOH GOES VISITING and other stories
Story 1 In which we are introduced
Story 2 In which Pooh goes visiting and gets into a tight place
Story 3 In which Pooh and Piglet go hunting and nearly catch a Woozle
Story 4 In which Eeyore loses a tail and Pooh finds one
Story 5 In which Piglet is entirely surrounded by water
Story 6 In which Christopher Robin gives a Pooh Party, and we say good-bye

PIGLET MEETS A HEFFALUMP and other stories
Story 1 In which Piglet meets a Heffalump
Story 2 In which Eeyore has a birthday and gets two presents
Story 3 In which Kanga and Baby Roo come to the forest, and Piglet has a bath
Story 4 In which Christopher Robin leads an exploration to the North Pole

The Twits, the Minpins & the Magic Fi...
by Roald Dahl

The Collected Stories of Winnie-the...
Winnie-the-Pooh

The Best Bear in All the World
Winnie-the-Pooh