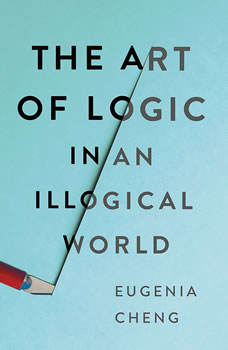 The Art of Logic in an Illogical World

How both logical and emotional reasoning can help us live better in our post-truth worldIn a world where fake news stories change election outcomes, has rationality become futile? In The Art of Logic in an Illogical World, Eugenia Cheng throws a lifeline to readers drowning in the illogic of contemporary life. Cheng is a mathematician, so she knows how to make an airtight argument. But even for her, logic sometimes falls prey to emotion, which is why she still fears flying and eats more cookies than she should. If a mathematician can't be logical, what are we to do? In this book, Cheng reveals the inner workings and limitations of logic, and explains why alogic--for example, emotion--is vital to how we think and communicate. Cheng shows us how to use logic and alogic together to navigate a world awash in bigotry, mansplaining, and manipulative memes. Insightful, useful, and funny, this essential book is for anyone who wants to think more clearly.

What if you had to take an art class in which you were only taught how to paint a fence? What if you were never shown the paintings of van Gogh and Picasso, weren't even told they existed? Alas, this is how math is taught, and so for most of us it b...

The Freakonomics of math—a math-world superstar unveils the hidden beauty and logic of the world and puts its power in our handsThe math we learn in school can seem like a dull set of rules, laid down by the ancients and not to be questioned. ...

The Joy of Pi
by David Blatner

No number has captured the attention and imagination of people throughout the ages as much as the ratio of a circle's circumference to its diameter. Pi—or ? as it is symbolically known—is infinite and, in The Joy of pi, it proves to be i...

Thinking In Numbers
by Daniel Tammet

The irresistibly engaging book that "enlarges one's wonder at Tammet's mind and his all-embracing vision of the world as grounded in numbers." --Oliver Sacks, MD THINKING IN NUMBERS is the book that Daniel Tammet, mathematical savant and bestselli...

Whether you are a student struggling to fulfill a math or science requirement, or you are embarking on a career change that requires a higher level of math competency, A Mind for Numbers offers the tools you need to get a better grasp of that intimi...

A fascinating guided tour of the complex, fast-moving, and influential world of algorithms-what they are, why they're such powerful predictors of human behavior, and where they're headed next. Algorithms exert an extraordinary level of influence o...

William Goldbloom Bloch is a respected professor of mathematics at Wheaton College. This intriguing lecture series, Mathematics Is Power, delves into both the history of mathematics and its impact on people’s everyday lives from a non-mathemat...

From the acclaimed author of A Tour of the Calculus and The Advent of the Algorithm, here is a riveting look at mathematics that reveals a hidden world in some of its most fundamental concepts. In his latest foray into mathematics, David Berlin...

In Calculating the Cosmos, Ian Stewart presents an exhilarating guide to the cosmos, from our solar system to the entire universe. He describes the architecture of space and time, dark matter and dark energy, how galaxies form, why stars implode, ho...