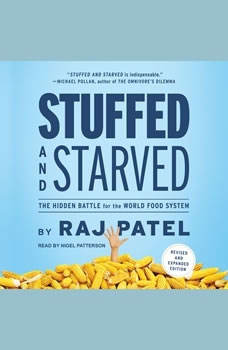 Stuffed and Starved: The Hidden Battle for the World Food System

It's a perverse fact of modern life: There are more starving people in the world than ever before, while there are also more people who are overweight. To find out how we got to this point and what we can do about it, Raj Patel launched a comprehensive investigation into the global food network. It took him from the colossal supermarkets of California to India's wrecked paddy-fields and Africa's bankrupt coffee farms, while along the way he ate genetically engineered soy beans and dodged flying objects in the protestor-packed streets of South Korea. What he found was shocking, from the false choices given us by supermarkets to a global epidemic of farmer suicides, and real reasons for famine in Asia and Africa. Yet he also found great cause for hope—in international resistance movements working to create a more democratic, sustainable and joyful food system. Going beyond ethical consumerism, Patel explains, from seed to store to plate, the steps to regain control of the global food economy, stop the exploitation of both farmers and consumers, and rebalance global sustenance.

In Grocery, bestselling author Michael Ruhlman offers incisive commentary on America’s relationship with its food and investigates the overlooked source of so much of it—the grocery store. In a culture obsessed with food—...

“Not since Michael Pollan has such a powerful storyteller emerged to reform American food.” —The Washington PostToday’s optimistic farm-to-table food culture has a dark secret: the local food movement has failed to change how...

Winner of the 2014 IACP Cookbook Award in the category of "Food Matters."The next stage in the food revolution--a radical way to select fruits and vegetables and reclaim the flavor and nutrients we've lost.Ever since farmers first planted seeds 10,...

The Chain
by Ted Genoways

On the production line in American packinghouses, there is one cardinal rule: the chain never slows. Under pressure to increase supply, the supervisors of meat-processing plants have routinely accelerated the pace of conveyors, leading to inhumane c...

**Now a docu-series airing on Netflix on February 19, 2016, starring Pollan as he explores how cooking transforms food and shapes our world. Oscar-winning filmmaker Alex Gibney exectuve produces the four-part series based on Pollan's book, and each ...

Are GMOs really that bad?  A prominent environmental journalist takes a fresh look at what they actually mean for our food system and for us. In the past two decades, GMOs have come to dominate the American diet. Advocates hail them as the futu...

Multiple award-winning author Adam Gopnik has written for the New Yorker since 1986. In this work, Gopnik charts America’s transformation from being simply aware of what they eat to being obsessive about it. This fascinating culinary journey ...

In The Dorito Effect, Mark Schatzker shows us how our approach to the nation's number one public health crisis has gotten it wrong. The epidemics of obesity, heart disease, and diabetes are not tied to the overabundance of fat or carbs. Instead, we ...

This program is read by the author.Some people reject the fact, overwhelmingly supported by scientists, that our planet is warming because of human activity. But do those of us who accept the reality of human-caused climate change truly believe it? ...