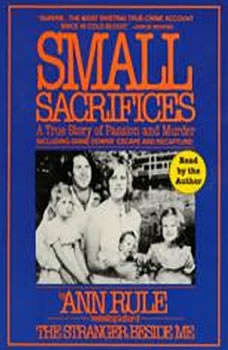 In the bestselling tradition of In Cold Blood, The Stranger Beside Me, and Fatal Vision, comes Small Sacrifices, the harrowing, headline-breaking story of Diane Downs, a woman so desperate for love and attention that she would attempt to murder her three children to please a man who wanted none.

A Fever in the Heart
by Ann Rule

A Fever in the Heart dissects an explosive triangle that led to obsession and murder in a small town in the northwest of America. Ann Rule reveals the story of an alluring wife and the two men desperate for her love; a story with a bizarre and deadl...

On the night of October 23/24, 1995 in Prairie Village, Kansas, a fierce, wind-driven fire devastated the luxurious mansion of Dr. Debora Green and her husband, Dr. Michael Farrar. Trapped and burned to death in the flames were twelve-year-old Tim a...

Dead by Sunset
by Ann Rule

The author of eight New York Times bestsellers, Ann Rule first won nationwide acclaim with The Stranger Beside Me, about serial killer Ted Bundy. Her Crime Files volumes, based on fascinating case histories, have assured her reputation as our premie...

Worth More Dead
by Ann Rule

Why would a man kill his lover's husband and then his wife, the woman who fought successfully to have him paroled from prison? Why would he risk arrest by kidnapping the child of another woman who adored him?Because they were…Worth More DeadA ...

You Belong to Me
by Ann Rule

A former Seattle policewoman, Ann Rule has extensive experience of violent crime and brings this knowledge to bear in this collection of fascinating case studies. You Belong to Me focuses on one of Florida's most shocking criminals—Tim Harris,...