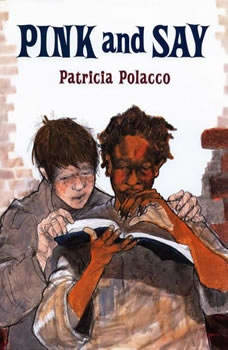 When Sheldon Russell Curtis told this story to his daughter, Rosa, she kept every word in her heart and was to retell it many times.
I will tell it in Sheldon's own words as nearly as I can.

He was wounded in a fierce battle and left for dead in a pasture somewhere in Georgia when Pinkus found him. Pinkus' skin was the color of polished mahogany, and he was flying Union colors like the wounded boy, and he picked him up out of the field and brought him to where the black soldier's mother, Moe Moe Bay, lived. She had soft, gentle hands and cared for him and her Pink.

But the two boys were putting her in danger, two Union soldiers in Confederate territory! They had to get back to their outfits. Scared and uncertain, the boys were faced with a hard decision, and then marauding Confederate troops rode in.

In this Civil War story passed from great-grandfather to grandmother, to son, and finally to the author-artist herself, Patricia Polacco once again celebrates the shared humanity of the peoples of this world.

I Survived #07: I Survived the Battle...
by Lauren Tarshis

The Mostly True Adventures of Homer P...
by Rodman Philbrick

The River Between Us
by Richard Peck

Wonder at the Edge of the World
by Nicole Helget

The Detective's Assistant
by Kate Hannigan