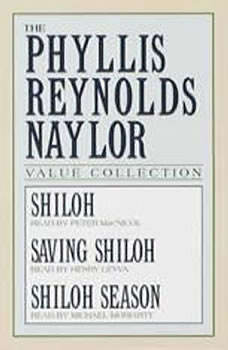 Shiloh
Eleven-year-old Marty Preston loves to spend time up in the hills behind his home near Friendly, West Virginia. But one summer Sunday, Marty comes across something different on the road just past the old Shiloh schoolhouse-a young beagle-and that's when the trouble begins.

Saving Shiloh
Marty Preston wonders why it is that despite Judd Traver's attempts to redeem himself everyone is still so willing to think the worst of him. But Marty's parents and with some trepidation, Marty himself, persist in their attempts to be good neighbors and to give Judd a second chance. Now that Marty has Shiloh, maybe he can help Judd to take care of his other dogs. Then again, maybe folks are right—there's no way a Judd Travers can ever change for the good.

Shiloh Season
After Marty Preston worked so hard to earn the dog, Shiloh, he had hoped that his troubles with Judd Travers were over. He could not rescue all the dogs that Judd mistreated, but since Shiloh was the one who ran away and came with him, Shiloh was the one he loved. Judd, however, has other problems.

Boken's Fantastic Feast of Food!
by Boken The Dog