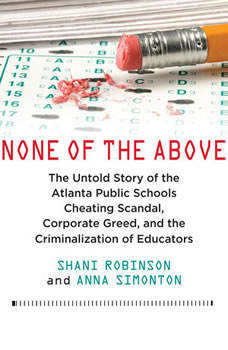 None of the Above: The Untold Story of the Atlanta Public Schools Cheating Scandal, Corporate Greed, and the Criminalization of Educators

An insider’s account of the infamous Atlanta Public Schools cheating scandal which scapegoated black employees for problems caused by an education reform movement that is increasingly a proxy for corporate greed.

In March of 2013, thirty-five black educators in Atlanta Public Schools were charged with racketeering and conspiracy—the same charges used to bring down the American mafia—for allegedly changing students’ answers on standardized tests. The youngest of the accused, Shani Robinson had taught for only three years and was a new mother when she was wrongfully convicted and faced up to 20 years in prison.

In None of the Above, Robinson and journalist Anna Simonton explore how racist policies and practices cheated generations of black children out of opportunities long before some teachers tampered with tests. Examining the corporate education reform movement, hyper-policing in black communities, cycles of displacement and gentrification, and widening racial and economic disparities in Atlanta, they reveal how the financially powerful have profited from privatization and the dismantling of public education. Against this backdrop, they cast the story of the cheating scandal in a new light, illuminating a deeply flawed investigation and a circus-like trial spun into a media sensation that defied justice.