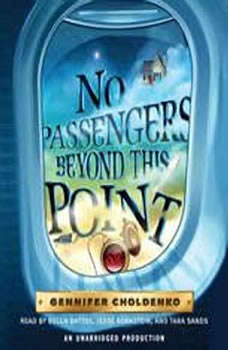 No Passengers Beyond This Point

Questions can be tricky things. Everyone has their own way of dealing with them. India Tompkins can charm her way out of answering most of them. Finn Tompkins is too quiet to be asked in the first place. And Mouse Tompkins? She’s a genius—she’s used to having all the answers.

But when they find themselves trapped in Falling Bird—a city seemingly without logic—the Tompkins kids are facing a whole slew of impossible questions, all demanding answers, and not even Mouse knows how to solve these.

How do you find your way home when you aren’t even on the map? What’s the fastest way to wrap your brain around a problem when time itself keeps getting away from you? And if your life at home wasn’t perfect, can you be sure you really want to go back?