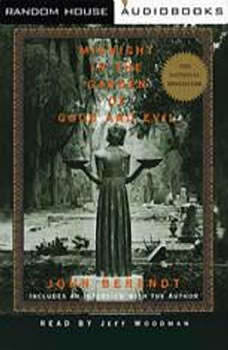 Midnight in the Garden of Good and Evil

Shots rang out in Savannah's grandest mansion in the misty,early morning hours of May 2, 1981.  Was it murder or self-defense?  For nearly a decade, the shooting and its aftermath reverberated throughout this hauntingly beautiful city of moss-hung oaks and shaded squares.  John Berendt's sharply observed, suspenseful, and witty narrative reads like a thoroughly engrossing novel, and yet it is a work of nonfiction.  Berendt skillfully interweaves a hugely entertaining first-person account of life in this isolated remnant of the Old South with the unpredictable twists and turns of a landmark murder case.

It is a spellbinding story peopled by a gallery of remarkable characters: the well-bred society ladies of the Married Woman's Card Club; the turbulent young redneck gigolo; the hapless recluse who owns a bottle of poison so powerful it could kill every man, woman, and child in Savannah; the aging and profane Southern belle who is the "soul of pampered self-absorption"; the uproariously funny black drag queen; the acerbic and arrogant antiques dealer; the sweet-talking, piano-playing con artist; young blacks dancing the minuet at the black debutante ball; and Minerva, the voodoo priestess who works her magic in the graveyard at midnight.  These and other Savannahians act as a Greek chorus, with Berendt revealing the alliances, hostilities, and intrigues that thrive in a town where everyone knows everyone else.

Midnight in the Garden of Good and Evil: A Savannah Story is a sublime and seductive reading experience.  Brilliantly conceived and masterfully written, this enormously engaging portrait of a most beguiling Southern city is certain to become a modern classic.

Too Late to Say Goodbye
by Ann Rule

America's foremost true-crime writer offers her most riveting real-life drama ever: a heartbreaking story of treachery, jealousy and murder. Jenn Corbin appeared to have it all: two dear little boys, a posh home in one of the upscale suburbs of ...

In October 2002, Susan Polk was arrested for the murder of her husband, Felix, kicking off what would become one of the most captivating murder trials in recent memory. Now, former judge and current Court TV host Catherine Crier turns an analytical...

The Suspicions of Mr. Whicher
by Kate Summerscale

The Suspicions of Mr. Whicher is a provocative work of nonfiction that reads like a Victorian thriller, and in it author Kate Summerscale has fashioned a brilliant, multilayered narrative that is as cleverly constructed as it is beautifully written.

When beautiful, blond Sheila married the charming, handsome Blackthorne, she was convinced she had found her perfect soul mate, and helped him attain the privileged life of the country club set. But behind Allen's smooth facade, she discovered a vio...