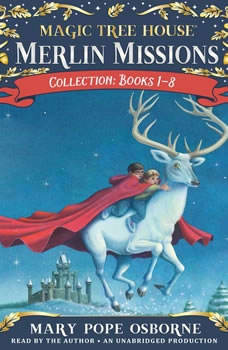 Merlin Mission Books 1-8 of the #1 New York Times bestselling Magic Tree House series available together for the first time ever!

Audiobooks in this Merlin Missions set include:

"Osborne's narration is low-key and well-paced. A great way to introduce children who are reluctant readers or can't yet read to this highly entertaining book series and to reading in general."--Chicago Parent