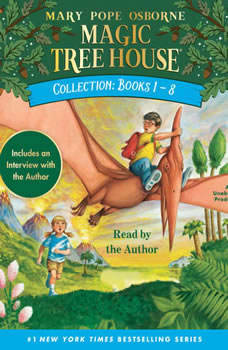 Jack and his younger sister, Annie, are just regular kids. But when they discover a tree house in the woods, something magical happens. In books 1-4, Jack and Annie are whisked back in time to the Age of Dinosaurs, a medieval castle, ancient pyramids, and treasure-seeking pirates. In books 5-8, Jack and Annie's friend, Morgan le Fay, is in trouble! They must find four "M" things to free her from a spell. Their adventures take them to meet a ninja master in ancient Japan, flee a crocodile on the Amazon River, discover the cave people of the Ice Age, and blast off to the moon in the future. It's a difficult and dangerous mission, but Jack and Annie will do anything to save a friend!

Mary Pope Osborne brings together just the right combination of history, magic, and fast-paced adventure to satisfy kids, parents, teachers, and librarians all over the world with her New York Times bestselling series.


"Osborne's narration is low-key and well-paced. A great way to introduce children who are reluctant readers or can't yet read to this highly entertaining book series and to reading in general."--Chicago Parent