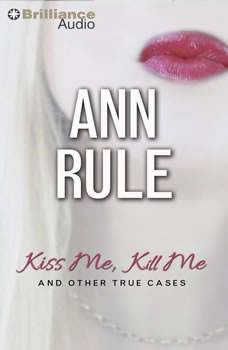 Kiss Me, Kill Me: And Other True Cases

The dark side of love is no fairy tale.... And while we may like to believe that crimes of the heart only victimize those who aren't careful, this shocking collection of real-life accounts will convince you otherwise. America's #1 true-crime writer, Ann Rule reveals how lovers become predators, how sex and lust can push ordinary people to desperate acts, and how investigators and forensics experts work to unravel the most entangled crimes of passion. Extracting behind-the-scenes details, Rule makes these volatile relationships utterly real, and masterfully re-creates the ill-fated chains of events in such cases as the ex-Marine and martial arts master who seduced vulnerable women and then destroyed their lives...the killer whose calling card was a single bloodred rose...the faithless wife who manipulated and murdered without conscience...the blind date that set the stage for a killer's brutality...and more. In every case, the victim - young and innocent or older and experienced - unknowingly trusted a stranger with the sociopathic skill to hide their dark motives, until it was too late to escape a web of deadly lies, fatal promises, and homicidal possession.