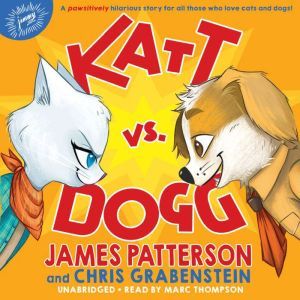 For anyone who loves cats, dogs (or both!), James Patterson's most pawsome story ever is set in a society defined by the oldest rivalry in the world: katts versus doggs! Oscar is a happy dogg---a rambunctious kid who loves being a Dogg Scout. Thanks to his family, he knows that snobby katts are good for nothing but chasing up trees. Molly is a clever katt who just knows she's destined for fame and fortune as an actress. She comes from a family of well-bred katts who despise drooly, disgusting doggs!For their whole lives, Oscar and Molly have been told that katts and dogs hate each other. One day, they each get hopelessly lost in the woods, but those lifelong prejudices flare up when they cross paths. Slowly, they realize that the only way to survive and find their way home is to...work together?!Yeah, that's not going to happen!