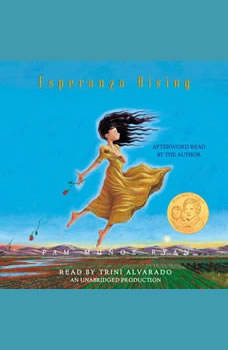 When Esperanza and Mama are forced to flee to the bountiful region of Aguascalientes, Mexico, to a Mexican farm labor camp in California, they must adjust to a life without fancy dresses and servants they were accustomed to on Rancho de las Rosas. Now they must confront the challenges of hard work, acceptance by their own people, and economic difficulties brought on by the Great Depression. When Mama falls ill and a strike for better working conditions threatens to uproot their new life, Esperanza must relinquish her hold on the past and learn to embrace a future ripe with the riches of family and community.

While violence runs rampant throughout New York, a teenage girl faces danger within her own home in Meg Medina's riveting coming-of-age novel.Nora Lopez is seventeen during the infamous New York summer of 1977, when the city is besieged by arson, a ...

Santiago the Dreamer in Land Among the Stars /
by Ricky Martin

When you reach for the moon…sometimes you land among the stars. Santiago’s biggest dream is to perform on stage.  But when he doesn’t get the lead role in the school play, he can’t help but doubt himself. Encouraged...

The Circuit
by Jimnez, Francisco

Francisco Jimenez writes of his childhood growing up in an immigrant Mexican family. His narrative is simple, as from a child's point of view, but that same simplicity packs the power of a highly skilled storyteller. Beautifully and authentically re...

When Hector's mother suggests that he and his amigo, Mando, get out of East LA for the weekend and see some of the world, he's thinking Paris. So he's a little disappointed when they end up in Fresno, sleeping on a lumpy couch in his Uncle Julio's m...

Look Both Ways in the Barrio Blanco
by Judith Robbins Rose

With humor and sensitivity, a debut novelist explores the coming of age of a girl caught between two cultures as she finds the courage to forge a new destiny."Miss, will you be my Amiga?" Amiga means "friend" in Spanish, but at the youth center, it ...

From Pulitzer Prize–winning novelist Oscar Hijuelos comes an unforgettable journey about identity, choices, and the way in which we all struggle to accept our true selves. In gritty, clear prose, Dark Dude captures New York City in the 1960s...

The Epic Fail of Arturo Zamora
by Pablo Cartaya

A 2018 Pura Belpré Author Honor BookSave the restaurant. Save the town. Get the girl. Make Abuela proud. Can thirteen-year-old Arturo Zamora do it all or is he in for a BIG, EPIC FAIL? For Arturo, summertime in Miami means playing b...

"I always thought that the biggest trial in my life was my name, Naomi Guadalupe Zamora Outlaw, but little did I know that it was the least of my problems, or that someday I would live up to it."One evening, everything Naomi has known with...

Living Up the Street
by Gary Soto

Growing up Mexican-American in Fresno, California in the 1950's and 60's might not have been easy, but it was certainly never boring for young Gary Soto, his brother Rick and sister Debra. As this compilation of 21 short stories and articles illustr...