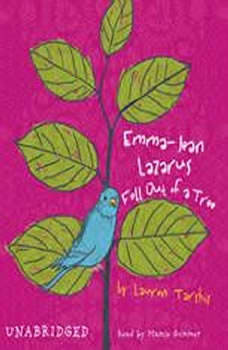 Emma-Jean Lazarus Fell Out of a Tree

Emma-Jean Lazarus is the smartest–and definitely the strangest–girl at William Gladstone Middle School. Her fellow seventh graders don’t understand her. But that’s okay, since Emma-Jean doesn’t understand them either. Emma-Jean has always considered it prudent to keep her distance, to observe from afar. Until one afternoon, when she walks into the girls’ room and discovers Colleen Pomerantz sobbing at the sink.
Colleen is one of those girls who cares a lot! About everything! And now the meanest girl in school is trying to steal her best friend, and the only one who seems to care is Emma-Jean Lazarus.
So our story begins, in the girls’ room, as two very different girls begin a journey that is sure to send one of them tumbling out of a tree . . .

Emma-Jean, is an intriguing character. She is intriguing the way Spock or Data both of Star Trek incarnations are. But that's the problem. As interesting and amusing as she is, this isn't a science fiction story. She isn't an alien or an android. She isn't even a highly functioning autistic child. Since she is none of the above, the entire story cannot support the initial premise. That she should be so peacefully excluded, and so content, her entire school career doesn’t workp The book is also schizophrenic in nature. I am not saying that dual narrative is a poor technique. It can be done well. But there seems no choice about the dual narrative, just a kind of literary happenstance. Who is the protagonist here? Emma-Jean or Colleen?p First-time novelist Lauren Tarshis shows potential here she can pull at the heartstrings she can create mostly believable conflict. But she still has some practicing to do.p Mamie Gummer does a capable job narrating.