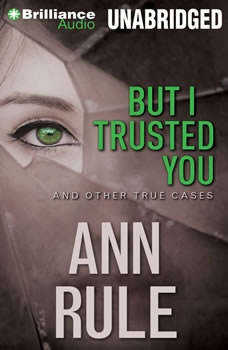 But I Trusted You: And Other True Cases

The most fatal mistake?Trust. It's the foundation of any enduring relationship between friends, lovers, spouses, and families. But when trust is placed in those who are not what they seem, the results can be deadly. Ann Rule, who famously chronicled her own shocking experience of unknowingly befriending a sociopath in "The Stranger Beside Me," offers a riveting, all-new collection from her true-crime files, with the lethally shattered bonds of trust at the core of each bloodsoaked account. Whether driven to extreme violence by greed or jealousy, passion or rage, these calculating sociopaths targeted those closest to them—unwitting victims whose last disbelieving words could well have been "but I trusted you.…"Headlining this anthology is the case of middle-school counselor Chuck Leonard, found shot to death outside his Washington State home on an icy February morning. A complicated mix of family man and wild man, Chuck played hard and loved many…but who crossed the line by murdering him in cold blood? And why? The revelation is as stunning as the shattering crime itself, powerfully illuminating how those we think we know can ingeniously hide their destructive and homicidal designs.Along with other shattering cases, immaculately detailed and sharply analyzed by America's #1 true-crime writer, this fourteenth Crime Files volume is essential listening for getting inside the mind of the hidden killers among us.

In the Still of the Night
by Ann Rule

FROM TRUE-CRIME LEGEND ANN RULE comes this riveting story of a young woman whose life ended too soon-and a determined mother's eleven-year crusade to clear her daughter's name. It was nine days before Christmas 1998, and thirty-two-year-old Ronda...

From trust to terror…from security to survival….Only Ann Rule, who unknowingly worked alongside the smart and charming Ted Bundy—America's most notorious serial killer—could lend her razor-sharp insight into these cases of th...

Lying in Wait
by Ann Rule

Three decades ago, Jackie Schut was considered one of the most prolific “baby sellers” in the country. She traveled all over the US, murdered women who had just borne babies, and then stole their infants. She is still imprisoned in the S...

Don't Look Behind You
by Ann Rule

I'll be watching you.Walking home on a dark night, you hear footsteps coming up behind you. As they get closer, your heart pounds harder. Who is closing in with dangerous intent—a total stranger? Or someone you know and trust? The answer is as...