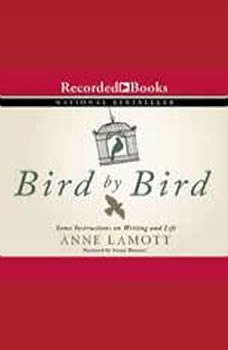 Bird by Bird: Some Instructions on Writing and Life

"Thirty years ago my older brother, who was ten years old at the time, was trying to get a report on birds written that he'd had three months to write. It was due the next day. We were out at our family cabin in Bolinas, and he was at the kitchen table close to tears, surrounded by binder paper and pencils and unopened books on birds, immobilized by the hugeness of the task ahead. Then my father sat down beside him, put his arm around my brother's shoulder, and said, 'Bird by bird, buddy. Just take it bird by bird.'"

The Elements of Style
by E. B. Strunk Jr White

The Elements of Style has long been a valued and beloved resource for all writers. Hailed for its directness and clever insight, this unorthodox textbook was born from a professor’s love for the written word and perfected years later by one...

Most of what you think you know about writing is useless. Its the harmful debris of your educationa mixture of half-truths, myths, and false assumptions that prevents you from writing well. Drawing on years of experience as a writer and teacher of w...

Zen in the Art of Writing
by Ray Bradbury

"Every morning I jump out of bed and step on a land mine. The land mine is me. After the explosion, I spend the rest of the day putting the pieces back together. Now, it's your turn. Jump!" Zest. Gusto. Curiosity. These are the qualities every write...

The Elements of Eloquence
by Mark Forsyth

From classic poetry to pop lyrics, from Charles Dickens to Dolly Parton, even from Jesus to James Bond, Mark Forsyth explains the secrets that make a phrase-such as "O Captain! My Captain!" or "To be or not to be"-memorable. In his inimitably enter...

The craft of writing offers countless potential problems: The story is too long; the story's too short; revising presents a huge hurdle; writer's block is rearing its ugly head. In HELP! FOR WRITERS, Roy Peter Clark presents an "owner's manual" fo...

Draft No. 4
by John McPhee

The long-awaited guide to writing long-form nonfiction by the legendary author and teacher Draft No. 4 is an elucidation of the writer's craft by a master practitioner. In a series of playful but expertly wrought essays, John McPhee shares insights ...

The Spooky Art
by Norman Mailer

“Writing is spooky,” according to Norman Mailer. “There is no routine of an office to keep you going, only the blank page each morning, and you never know where your words are coming from, those divine words.” In The Spooky A...

How to Write a Thesis
by Umberto Eco

By the time Umberto Eco published his best-selling novel The Name of the Rose, he was one of Italy's most celebrated intellectuals, a distinguished academic and the author of influential works on semiotics. Some years before that, in 1977, Eco publi...