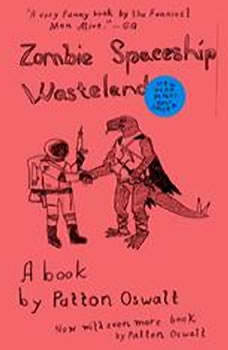 A hilarious memoir from one of the most creative, insightful, and hysterical voices on the entertainment scene today. Best known for his roles in the films Big Fan and Ratatouille, as well as the television hit The King of Queens, Patton has been amusing audiences for decades. Now, with Zombie Spaceship Wasteland, he offers a fascinating look into his most unusual and loveable mind.Oswalt combines memoir with uproarious humor, from his childhood obsessions with Dungeons and Dragons, Edgar Allan Poe, and gifts from Grandma that had to be explained to a pitch-perfect depiction of an adolescence spent reading everyone from Beverly Cleary to Anthony Burgess. He remembers his teen summers spent working in a movie Cineplex and his early years doing standup. Listeners are also treated to several graphic short stories and the book’s centerpiece, which posits that before all young creative minds have anything to write about, they will all hone in on one of three storylines: zombies, spaceships, or wastelands.Oswalt chose wastelands, and ever since he has been mining our society’s wasteland for perversion and excess, pop culture and fatty foods, indie rock and single malt scotch. Zombie Spaceship Wasteland is an inventive account of the evolution of Patton Oswalt’s wildly insightful worldview, sure to delight his legion of fans and lure many new admirers to his very entertaining “wasteland.”

I didnt know who Patton Oswalt was before I started reading this book. I was just looking for something to make me laugh and it came up as a recommendation for me. If I was to go by this book I would have to say that Oswalt isnt a very entertaining comedian. I decided to look him up on Youtube and found, rather, that he is quite funny. The book is so much different then his stand up. It seemed to drift from one thing to another and there wasnt very much there that made me chuckle. I grew up in the same time as he talked about and thought I could really enjoy this but I didnt. I liked some parts of the book like Dungeon & Dragons or when he went on about some of the greeting cards. But still, it didnt make me laugh or even giggle. It was more like a thought when through my head that said either hmmm, I remember that or thats neat but nothing spectacular happened. I think if you want the real depth of Oswalt then watch his stand up but stay away from the book.