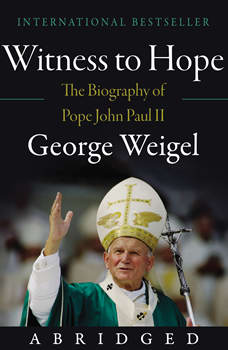 Given unprecedented access to Pope John Paul II and the people who have known and worked with him throughout his life, George Weigel presents a groundbreaking portrait of the Pope as a man, a thinker, and a leader whose religious convictions have defined a new approach to world politics--and changed the course of history. John Paul II has systematically addressed every major question on the world's agenda at the turn of the millennium: the human yearning for the sacred, the meaning of freedom, the glories and challenges of human sexuality, the promise of the women's movement, the quest for a new world order, the nature of good and evil, the moral challenge of prosperity, and the imperative of human solidarity in the emerging global civilization.By bringing the age-old wisdom of biblical religion into active conversation with contemporary life and thought, the Pope "from a far country" has crafted a challenging proposal for the human future that is without parallel in the modern world. Weigel explores new information about the Pope's role in some of the recent past's most stirring events, including the fall of communism; the Vatican/Israel negotiation of 1991-92; the collapse of the Philippine, Chilean, Nicaraguan, and Paraguayan dictatorships during the 1980s; and the epic papal visit to Cuba. Weigel also includes previously unpublished papal correspondence with Leonid Brezhnev, Mikhail Gorbachev, and Deng Xiaoping, and draws on hitherto unavailable autobiographical reminiscences by the Pope. Witness to Hope also discusses the Pope's efforts to build bridges to other Christian communities, and to Judaism, Islam, and other great world religions; presents an analysis of John Paul's proposals for strengthening democratic societies in the twenty-first century; and offers synopses of every major teaching document in the pontificate. Rounding out the dramatic story of Pope John Paul II are fresh translations of his poetry; detailed personal anecdotes of the Pope as a young man, priest, and friend, sketched by those who knew him best; and in-depth interviews with Catholic leaders throughout the world. A magisterial biography of one of the most important figures--some might argue, the most important figure--of the twentieth century, Witness to Hope is an extraordinary testimony to the man and his accomplishments, and a papal biography unlike any other.