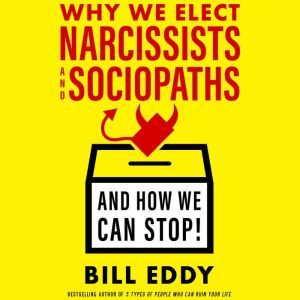 Why We Elect Narcissists and Sociopaths - And How We Can Stop!

Bestselling author, therapist, lawyer, and mediator Bill Eddy describes how dangerous, high-conflict personalities have gained power in governments worldwide—and what citizens can do to keep these people out of office. Democracy is under siege. The reason isn't politics but personalities: too many countries have come under the sway of high-conflict people (HCPs) who have become politicians. Most of these high-conflict politicians have traits of narcissistic personality disorder, antisocial (i.e., sociopathic) personality disorder, or both. This is the first and only guide for identifying and thwarting them. HCPs don't avoid conflict, they thrive on it, widening social divisions and exacerbating international tensions. Eddy, the world's leading authority on high-conflict personalities, explains why they're so seductive and describes the telltale traits that define HCPs—he even includes a helpful list of forty typical HCP behaviors.Drawing on historical examples from Hitler, Stalin, Mao, and Nixon to Trump, Maduro, and Putin, Eddy shows how HCPs invent enemies and manufacture phony crises so they can portray themselves as the sole heroic figure who can deal with them, despite their inability to actually solve problems. He describes the best ways to expose HCPs as the charlatans they are, reply to their empty and misleading promises, and find genuine leaders to support. Eddy brings his deep psychotherapeutic experience to bear on a previously unidentified phenomena that presents a real threat to the world.