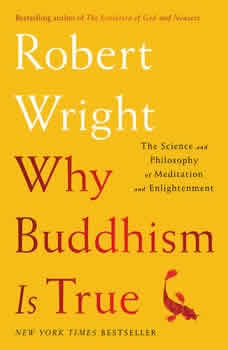 Why Buddhism is True: The Science and Philosophy of Enlightenment

From one of America’s greatest minds, a journey through psychology, philosophy, and lots of meditation to show how Buddhism holds the key to moral clarity and enduring happiness.Robert Wright famously explained in The Moral Animal how evolution shaped the human brain. The mind is designed to often delude us, he argued, about ourselves and about the world. And it is designed to make happiness hard to sustain. But if we know our minds are rigged for anxiety, depression, anger, and greed, what do we do? Wright locates the answer in Buddhism, which figured out thousands of years ago what scientists are only discovering now. Buddhism holds that human suffering is a result of not seeing the world clearly—and proposes that seeing the world more clearly, through meditation, will make us better, happier people. In Why Buddhism is True, Wright leads readers on a journey through psychology, philosophy, and a great many silent retreats to show how and why meditation can serve as the foundation for a spiritual life in a secular age. At once excitingly ambitious and wittily accessible, this is the first book to combine evolutionary psychology with cutting-edge neuroscience to defend the radical claims at the heart of Buddhist philosophy. With bracing honesty and fierce wisdom, it will persuade you not just that Buddhism is true—which is to say, a way out of our delusion—but that it can ultimately save us from ourselves, as individuals and as a species.

In this revolutionary book, a professor of education at Stanford University and acclaimed math educator who has spent decades studying the impact of beliefs and bias on education, reveals the six keys to unlocking learning potential, based on the la...

No Time for Tears
by Judy Heath

Facing the loss of a loved one in a death-avoidant culture can be excruciating. Grievers may be expected to put on a brave face, to “move on” quickly, and to seek medication if they are still grief-stricken after an “acceptable&rdq...

The Gift of Therapy
by Irvin Yalom

The culmination of master psychiatrist Dr. Irvin D. Yalom's more than thirty-five years in clinical practice, The Gift of Therapy is a remarkable and essential guidebook that illustrates through real case studies how patients and therapists ali...

Messages from the Masters
by Brian Weiss

The true story of a prominent psychiatrist, his young patient, and the past-life therapy that changed both their lives. As a traditional psychotherapist, Dr. Brian Weiss was astonished and skeptical when one of his patients began recalling past-lif...

In this completely revised and updated edition of the breakthrough bestseller, neuropsychiatrist Dr. Daniel Amen includes effective "brain prescriptions" that can help heal your brain and change your life.To quell anxiety and panic:Use simple b...

The The Conscious Mind
by Zoltan Torey

How did the human mind emerge from the collection of neurons that makes up the brain? How did the brain acquire self-awareness, functional autonomy, language, and the ability to think, to understand itself and the world? In this volume in the Essent...

The Evolution of Desire
by David M. Buss

If we all want love, why is there so much conflict in our most cherished relationships? To answer this question we must look into our evolutionary past, argues prominent psychologist David M. Buss. Based one of the largest studies of human mating e...

The Nazi and the Psychiatrist
by Jack El-Hai

In 1945, after his capture at the end of the Second World War, Hermann Gring arrived at an American-run detention center in war-torn Luxembourg, accompanied by sixteen suitcases and a red hatbox. The suitcases contained all manner of paraphernalia: ...

Cracked, Not Broken
by Kevin Hines

The Golden Gate Bridge is one of the most recognizable structures to define a modern city. Yet, for author Kevin Hines the bridge is not merely a marker of a place or a time. Instead, the bridge marks the beginning of his remarkable story. At ninete...