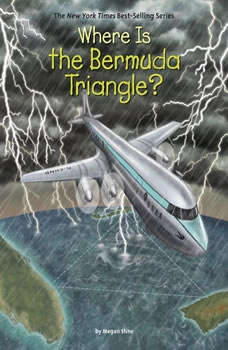 Where is the Bermuda Triangle?

Who doesn't love a great mystery? This book presents the eerie accidents and unexplained disappearances that have occurred in the region known as the Bermuda Triangle.

Even before it was named, the Bermuda Triangle--roughly bounded by Miami, Bermuda, and Puerto Rico--had gained a mythic reputation. The Bermuda Triangle became famous for making boats and ships vanish, and for snatching planes right out of the sky. But are these stories true? And if they are true, is there a more sensible reason that refutes the bad karma of the region? With so many mystifying events to learn about, readers will love disappearing into this story.

The incredible true story of the twelve boys trapped with their coach in a flooded cave in Thailand and their inspiring rescue.On June 23, 2018, twelve members of the Wild Boars soccer team and their coach were exploring the Tham Luang cave complex ...

What Women Dont Know About Men
by Jazz Vazquez

Dating expert Jazz Vazquez explains what women don’t know about men and startling male sexual dynamics. Jazz has the shocking and sometimes disturbing inside view of the rarely exposed male psyche. What does it really mean when a man tells you...

The new "National Geographic Treasury of Egyptian Mythology" is a stunning tableau of Egyptian myths, including those of pharaohs, queens, the boisterous Sun God Ra, and legendary creatures like the Sphinx. The lyrical storytelling of award-winning ...

Who Was Marie Curie?
by Megan Stine

Born in Warsaw, Poland, on November 7, 1867, Marie Curie was forbidden to attend the male-only University of Warsaw, so she enrolled at the Sorbonne in Paris to study physics and mathematics. There she met a professor named Pierre Curie, and the two...

Psychology
by Centre of Excellence

Psychology is not only a science and a profession but its concepts can also be used in everyday life. Listen to the Psychology Audiobook and you gain a greater knowledge of feelings, abilities and personalities.