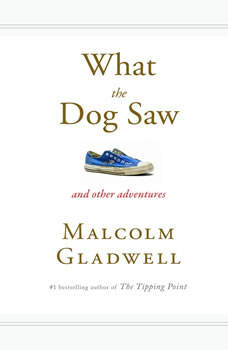 What the Dog Saw: And Other Adventures

Over the past decade, Malcolm Gladwell has become the most gifted and influential journalist in America. In The New Yorker, his writings are such must-reads that the magazine charges advertisers significantly more money for ads that run within his articles. With his #1 bestsellers, The Tipping Point, Blink and Outliers, he has reached millions of readers. And now the very best and most famous of his New Yorker pieces are collected in a brilliant and provocative anthology. Among the pieces: his investigation into why there are so many different kinds of mustard but only one kind of ketchup; a surprising assessment of what makes for a safer automobile; a look at how we hire when we can't tell who's right for the job; an examination of machine built to predict hit movies; the reasons why homelessness might be easier to solve than manage; his famous profile of inventor and entrepreneur Ron Popeil; a look at why employers love personality tests; a dissection of Ivy League admissions and who gets in; the saga of the quest to invent the perfect cookie; and a look at hair dye and the hidden history of postwar America.For the millions of Malcolm Gladwell fans, this anthology is like a greatest hits compilation-a mix tape from America's alpha mind

The Deficit Myth
by Stephanie Kelton

The Financial Crisis and the Free Mar...
by John Allison