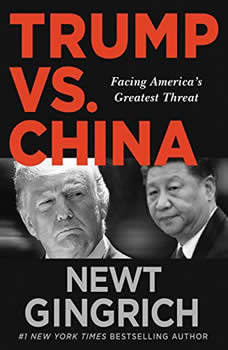 Former Speaker of the House Newt Gingrich sounds the warning bell that China poses the biggest threat to the United States.Every American needs to understand the threat to America's safety and prosperity posed by China's reemergence as a world power. Unlike our other economic and military rivals, China is the only country big enough and with enough human resources to compete with us everywhere in the world. From the point of view of Beijing, China has a long history of dominating the world, and the past century of Western dominance is only a temporary blip. Their strategy to overtake America involves using spying, extortion, lawsuits, economic infiltration, intellectual property theft, propaganda and sabotage to weaken the United States and strengthen China. Gingrich's research will show that it is clear Chinese leaders are following this strategy to the letter, and that it is working as planned.It is possible for America to respond to the Chinese effort but doing so will require many big changes and hard choices for our leaders in government and private sector. That is why it is vital to build an understanding of the China challenge so there is consensus and political support to be what must be done. Newt Gingrich's TRUMP VS CHINA will serve as a rallying cry for the American people and a plan of action for our leaders in government and the private sector. Written in a language that every American can understand, but still rich in detail and accurate in fact, TRUMP VS CHINA will lay out China's multi-pronged attack against the United States and what we must do to combat it.

Has China Won?
by Kishore Mahbubani