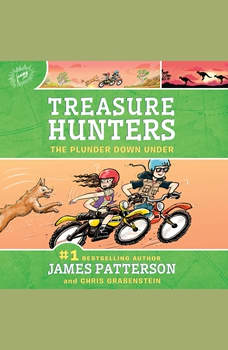 Treasure Hunters: The Plunder Down Under

With their parents in trouble once again, the Kidds must traverse the Australian Outback, recover a pair of stolen gems, and defeat treasure-hunting pirates to save them!The Kidd family is on their way to Australia to find Lasseter's Gold when they are challenged by fellow treasure hunter Charlotte Badger, who challenges them to a race to the gold! But when the Kidds pull into port in Australia, their parents are suddenly arrested -- they've been framed! It turns out Charlotte Badger is a pirate, and she's planted a priceless stolen black opal on the Kidds' ship, The Lost!Now Bick, Beck, Storm, and Tommy have seven days to traverse the Australian Outback, find Charlotte Badger and her pirate cronies, and bring back the evidence that will prove their parents innocent. If they fail, their parents will be found guilty and thrown in prison . . . forever!

Shivers!: The Pirate Who's Back in Bu...
by Annabeth Bondor-Stone

The Hunters
by John Flanagan

Downriver
by Will Hobbs

Island of Thieves
by Josh Lacey

Shivers!: The Pirate Who's Afraid of ...
by Annabeth Bondor-Stone

The Very Nearly Honorable League of P...
by Caroline Carlson

Race to the Bottom of the Sea
by Lindsay Eagar

Pirates of the Caribbean: The Curse o...
by Disney Press