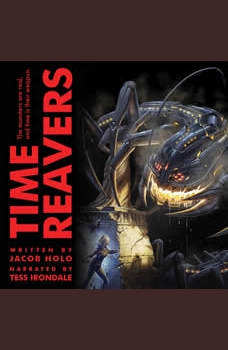 The universe is a hamburger.

That’s what sixteen-year-old Nicole Taylor learns when a mysterious time-bending stranger saves her from a rampaging cyborg centipede.

See, the top bun? That’s our dimension. The bottom bun? That’s the monster’s dimension. And the patty? That’s a dimension where the two worlds meet – and the Reavers can attack.

The Reavers are horrific cybernetic killing machines, and their plans for the top bun? Well, they’re as terrifying as you’d expect.

But Nicole isn’t helpless. She has a rare gift. She can bend time around her and even stop it completely.

Plagued with nightmares and ambushed by monsters at every turn, Nicole has one chance to stop the Reavers’ genocidal invasion. With help from a chain-smoking pyromaniac, a neurotic sword-wielding assassin, and an icy goth chick with a crossbow, she’ll make a stand against the evil bugs.

Because if the universe is a hamburger, the Reavers want a bite.