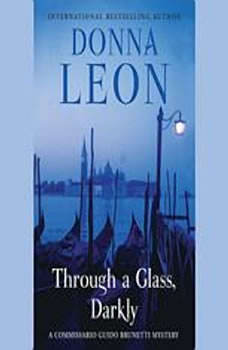 Through a Glass, Darkly

On a spring day in Venice, Commissario Brunetti and his assistant Vianello play hooky to help Vianello's friend Marco Ribetti, arrested during an environmental protest. They secure his release, only to be faced with the fury of the man's father-in-law, Giovanni De Cal, who has made violent threats against Ribetti. Brunetti's curiousity is piqued, and he finds himself drawn to investigate. Is De Cal the type of man to carry out his threats? When the body of De Cal's bookish night watchman is found in front of the blazing furnace, he wonders: Could the old man have killed him?

Once again Donna Leon and David Colacci pair to create an entertaining listen. Ms. Leon's book is brought to life by Mr. Colacci who is an old friend of Commissario Brunetti's by now. With Brunetti it does not seem odd that a modern detective would flit between current pollution issues and Dante's Divine Comedy. The author adroitly sets the stage for a crime that doesn't occur until well into the book but the story never falters. This is not great literature but it is extremely well written and very entertaining. As usual this is not a book you want to listen to on an empty stomach for Brunetti's meals will drive you to the nearest restaurant in search of meal half as memorable as his everyday fare.

Through a Glass, Darkly
A Commissario Guido Brunetti Myster...