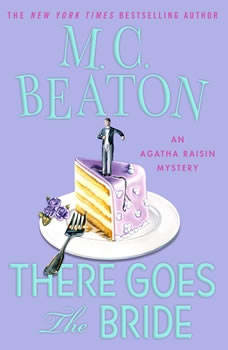 There Goes the Bride: An Agatha Raisin Mystery

Bossy, impulsive, yet hopelessly romantic, Agatha is dreading the upcoming marriage of her ex-husband, James Lacey. Although she has set her sights on a handsome and beguiling new Frenchman, she can't quite stop obsessing about James. Her best intentions to move on with her life are put on hold when James's young bride is shot to death just minutes before saying "I do" and Agatha is named the prime suspect. Agatha's sleuthing sidekick Toni stands ready to help find the real killer, but the case proves trickier than ever. Will her name be cleared, or has the outrageous Agatha finally had her last romp?

Four to Score
by Janet Evanovich

A Featured Alternate Selection of the Literary Guild and Doubleday Book Club and a Main Selection of the Mystery GuildJanet Evanovich, bestselling author of One for the Money, Two for the Dough, and Three to Get Deadly, scores big with Four to Score...

Evanovich fans rejoice for Plum Spooky! Stephanie Plum is back in town, along with her sidekick Lula, her Grandma Mazur, and an ever-widening cast of freaks, criminals, deranged felons, and lunatics looking for love. And just when Stephanie thinks...

The Monterey Peninsula is rocked when a killer begins to leave roadside crosses beside local highways -- not in memoriam, but as announcements of his intention to kill. And to kill in particularly horrific and efficient ways: using the personal deta...

Agatha Raisin and the Love from Hell
by M. C. Beaton

Recently married to James Lacey, the witty and fractious Agatha Raisin quickly finds that marriage, and love, are not all they are cracked up to be. Rather than basking in marital bliss, the newlyweds are living in separate cottages and accusing eac...

Whisper to the Blood
by Dana Stabenow

Recipe for disaster: Celebrity chef Stanley Chipotle comes to Trenton to participate in a barbecue cook-off and loses his head – literally.Throw in some spice: Bail bonds office worker Lula is witness to the crime, and the only one she'll talk...

There Goes the Bride: An Agatha Rai...
The Agatha Raisin Mysteries #20

As the Pig Turns
The Agatha Raisin Mysteries