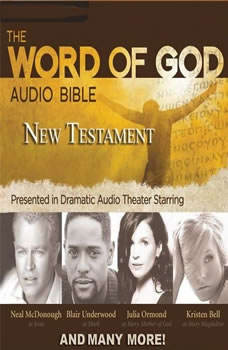 The “Word of God Dramatized Audio Bible” is a brilliantly recorded production of the Revised Standard Version of the New Testament.This 22-hour production is voiced by a star-studded cast and includes an original score and sound effects which make Scripture come alive!Casting Credits: Neil McDonough as Jesus, Blair Underwood as Mark, Julia Ormond as Mary, the Mother of God, Kristen Bell as Mary Magdaline and many more!

Macbeth, Shakespeare’s last great tragedy, has remained one of the most popular plays since it’s first performance in 1606 – probably in front of King James. This exciting new audiobook production is directed with fresh imagin...

Romeo and Juliet
by William Shakespeare

Shakespeare’s Othello is one of his finest and most famous tragedies. This highly acclaimed performance, which ran between November 2007 and February 2008 at the Donmar Warehouse in London, features Chiwetel Ejiofor as the Moor Othello, Ewan M...

This widely-studied play is one of the best sellers of the Shakespeare canon. This production is the sixth Shakespeare play in the series undertaken by Naxos AudioBooks in conjunction with Cambridge University Press.