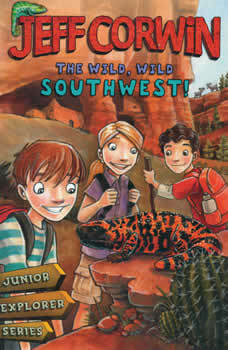 First, wildlife biologist Jeff Corwin took junior explorers to a New York City backyard to explore the wonders of an urban jungle. Then Corwin showed kids how much fun could be had investigating Alaska-one of the most breathtaking places on Earth! Now Corwin takes young readers to New Mexico and the Gila National Forest for more investigation of the natural world. New Mexico's beautiful desert locale is the ideal place to uncover strange and startling plants and animals. And eager children Lucy, Benjamin and Gabe are about to find there is a world of discovery in this rugged landscape. Whether kids live in the city or in the middle of a desert, Corwin makes it clear there's an adventure to be had right in their backyards! Corwin, an Emmy Award-winning producer and host of numerous television programs, has spent his life working for the conservation of endangered species. His infectious enthusiasm is perfectly conveyed by acclaimed narrator Mark Turetsky.