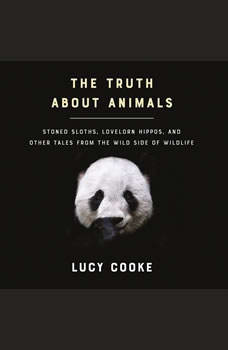 The Truth About Animals: Stoned Sloths, Lovelorn Hippos, and Other Tales from the Wild Side of Wildlife

Mary Roach meets Bill Bryson in this "surefire summer winner" (Janet Maslin, New York Times), an uproarious tour of the basest instincts and biggest mysteries of the animal worldHumans have gone to the Moon and discovered the Higgs boson, but when it comes to understanding animals, we've still got a long way to go. Whether we're seeing a viral video of romping baby pandas or a picture of penguins "holding hands," it's hard for us not to project our own values--innocence, fidelity, temperance, hard work--onto animals. So you've probably never considered if moose get drunk, penguins cheat on their mates, or worker ants lay about. They do--and that's just for starters. In The Truth About Animals, Lucy Cooke takes us on a worldwide journey to meet everyone from a Colombian hippo castrator to a Chinese panda porn peddler, all to lay bare the secret--and often hilarious--habits of the animal kingdom. Charming and at times downright weird, this modern bestiary is perfect for anyone who has ever suspected that virtue might be unnatural.