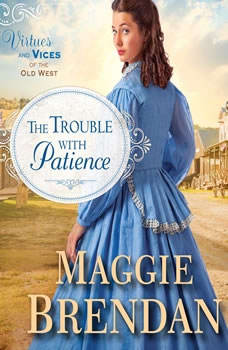 The Trouble with Patience

Patience Cavanaugh has lost hope in romance. The man she yearned to marry is dead and her dreams are gone with him. Now she is consumed with restoring a dilapidated boarding house in order to support herself. Despite Patience&rsquo;s desire for solitude, Jedediah Jones, the local marshal with a reputation for hanging criminals, becomes an ever-looming part of her life. It seems like such a simple arrangement: She needs someone with a strong back to help her fix up the boardinghouse. He needs a dependable source of food for himself and his prisoners. But as she gets to know this &ldquo;hanging lawman,&rdquo; Patience finds there is far more to him than meets the eye &mdash; and it could destroy their tenuous relationship forever. With a keen eye for historical detail and a deft hand at romantic tension, Maggie Brendan invites you to a Montana gold rush boomtown, where vices and virtues are on full display and love is lying in wait

A Tale of Three Kings
by Gene Edwards

This modern classic will bring light, clarity, and comfort to the brokenhearted. Many Christians have experienced pain, loss, and heartache at the hands of other believers. To those believers, this compelling story offers comfort, healing and hope. ...