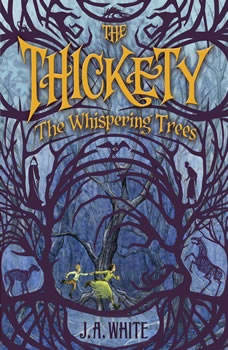 The Thickety: The Whispering Trees

The Thickety is no place to be alone. The branches closed behind Kara and Taff when they rode Shadowdancer into the dark forest. But there is no returning to the village, and Sordyr chases close behind. The forest demon has a terrible plan—one that requires Kara's magic to succeed.The dangers of the Thickety are many. Its plants are often deadly, strange animals whisper among the trees, and unknown magic lurks behind every twist and shadow of the path. But more dangerous still are the other inhabitants of the Thickety: Sordyr and his snapping branchwolves; the shadowy residents of an abandoned village; and Imogen, a creature with an unspeakable hunger.They would do anything she asked.All she had to do was use her magic. And then there's Mary Kettle, a strange witch seeking redemption from a horrifying past. She offers to lead them out of the Thickety while teaching Kara how to cast spells without a grimoire. The children are hesitant to trust her . . . but this could be their only chance to escape.Or the first step down a dark and wicked path.