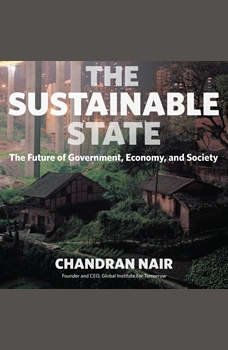 The Sustainable State: The Future of Government, Economy, and Society

The free-market, limited government development model has been an ecological and social disaster for the developing world. Sustainable and equitable development is only possible with the active involvement of a strong central state that can guide the economy, protect the environment, and prioritize meeting their people's basic needs. In this sure to be controversial book, Chandran Nair shows that the market-dominated model followed by the industrialized west is simply not scalable. The United States alone, with less than five percent of the world's population, consumes nearly a quarter of its resources. If countries in Asia, where 60% of the world's population lives, try to follow the Western lead, the results will be calamitous. .Instead, Nair argues that development must be directed by a state that is willing and able to intervene in the economy . Corporations, which by design demand ever-expanding consumption, need to be directed towards meeting societal needs or otherwise restrained, not unleashed. Development has to be oriented towards the greatest good—clean drinking water for the many has to take precedence over swimming pools for the few. He provides three compelling case studies demonstrating the benefits of such strong state governance and the findings of weak state governance.This will mean rethinking the meaning of concepts like “prosperity,” “freedom,” and “rights,” and whether democracy is always the best way to ensure responsive government—as Nair writes, “A democracy that cannot work to improve the life of its citizens is not better than a non-democracy that can actually improve quality of life.” Many people will find these to be challenging ideas, but what Nair offers is a model suited to the realities of the developing world, not the assumptions of the dominant culture.