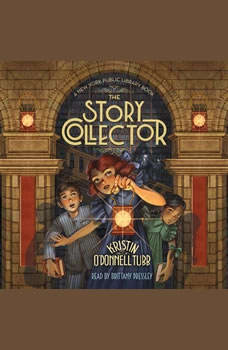 "Viviani Joffre Fedeler is full of spunk and pizzazz, thanks to the craft of narrator Brittany Pressley. She weaves Tubb's story masterfully, bringing alive Viviani's wild imagination and exciting tales about what goes on in the New York Public Library." — AudioFile Magazine The Story Collector by Kristin O'Donnell Tubb is a middle-grade historical fiction audiobook inspired by the real life of Viviani Joffre Fedeler, born and raised in the New York Public Library.Eleven-year-old Viviani Fedeler has spent her whole life in the New York Public Library. She knows every room by heart, except the ones her father keeps locked. When Viviani becomes convinced that the library is haunted, new girl Merit Mubarak makes fun of her. So Viviani decides to play a harmless little prank, roping her older brothers and best friend Eva to help out.But what begins as a joke quickly gets out of hand, and soon Viviani and her friends have to solve two big mysteries: Is the Library truly haunted? And what happened to the expensive new stamp collection? It's up to Viviani, Eva, and Merit (reluctantly) to find out.

It’s been two months now since Travis’s family moved from their shabby old house to a development so new that it seems totally unreal. There’s one place, though, where Travis can connect with his old life: the Salinas library. He a...

The Case of the Case of Mistaken Identity
by Mac Barnett

Steve Brixton always wanted to be a detective . . . until he found out he already was one. It all starts here: the thrilling story of Steve Brixton’s first case. Our hero has a national treasure to recover, a criminal mastermind to unmask, and...

The Forbidden Library
by Django Wexler

The Forbidden Library kicks off a brand new classic fantasy series perfect for fans of Coraline, Inkheart, and The Books of ElsewhereAlice always thought fairy tales had happy endings. That--along with everything else--changed the day she met her fi...

Charlie and the Chocolate Factory meets A Night in the Museum in this action-packed New York Times Bestseller from Chris Grabenstein, coauthor of I Funny, Treasure Hunters and other bestselling series with Jam...

The School Story
by Andrew Clements

From the best-selling author of Frindle, The Landry News, and The Janitor's Boy.Twelve-year-old Natalie has written a fabulous book and is determined to get it published. Luckily, she has connections to the publishing world--her mother is an assist...

The Fall of the Readers
by Django Wexler

In this thrilling conclusion to Alice's adventures in The Forbidden Library she must lead her band of friends, magical beings, and creatures against the collected might of the Old Readers—perfect for fans of Story Thieves, Inkheart,&...

The New York Times bestselling, puzzle-packed sequel to the award-winning Escape from Mr. Lemoncello’s Library by Chris Grabenstein, coauthor of I Funny, Treasure Hunters and other bestselling series with James Patterson! &...

The Island of Dr. Libris
by Chris Grabenstein

New from the author of Escape from Mr. Lemoncello’s Library and coauthor of the I Funny series with James Patterson! Celebrate the power of imagination with this action-packed New York Times bestseller that shows that sometimes the real story ...