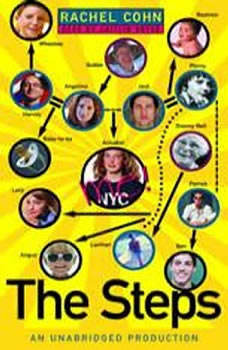 Twelve-year-old Annabel thought Christmas break was going to be amazing. She’d planned to stay home in New York City with her best friend and do traditional things like go ice-skating in Rockefeller Center, hit the after-Christmas sale at Bloomingdale’ s, and scream with the TRL crowd at MTV in Times Square. But when her best friend bails, Annabel’s mom decides it’s high time Annabel visit her father and his new family in Australia.

Annabel is not pleased about traveling around the world to meet “the steps”–twelve-year-old fashion-disaster stepsister, five-year-old stepbrother, and baby half sister–but she’s not going to waste this chance to steal her father back.

The Impossible Vastness of Us
by Samantha Young

"I know how to watch my back. I'm the only one that ever has." India Maxwell hasn't just moved across the country—she's plummeted to the bottom rung of the social ladder. It's taken years to cover the mess of her home life with a v...

Seventeen-year-old Cassie Morgan lives with a time bomb (a.k.a. her stepfather, Dino Cavalli). To the public, Dino is a world-renowned violin player and composer. To Cassie, he’s an erratic, self-centered bully. And he’s getting worse: H...

Lord of the Deep
by Graham Salisbury

ALA Book Award winner Graham Salisbury writes dramatic stories for young adult readers. One of the most critically acclaimed books of 2001, Lord of the Deep is a vivid fishing adventure that takes place off of the great blue island of Hawaii. Since ...

Unconditional kindness is the key in this National Book Award Finalist from the author of The Wainscott Weasel about nontraditional families, adoption, love—and a little peace and quiet.Margaret is a mean, cranky human toddler from a family of...

Sarah came to the prairie from Maine to marry Papa. But that summer, a drought turned the land dry and brown. Fires swept across the fields and coyotes came to the well in search of water. So Sarah took Anna and Caleb back east, where they would be...

At the Sign of the Star
by Katherine Sturtevant

In 1677, 12-year-old Meg loves working with her widowed father in his London bookshop. When she grows up, she will inherit the shop. Then she will be independent and can choose her own husband. But her father remarries, and Meg's plans are suddenly ...

Eleven-year-old Isabella’s blended family is more divided than ever in this thoughtful story about divorce and racial identity from the award-winning and New York Times bestselling author of Out of My Mind, Sharon M. Draper.Eleven-year-old Isa...

The third book in the series that began with the Newbery Medal–winning Sarah, Plain and Tall by Patricia MacLachlan. This audio edition is narrated by Glenn Close.Anna has done something terrible. She has given me a journal to fill."It's your...

When twelve-year-old Casey's sole guardian--her stepmother Sylvia--doesn't come home one night, Casey believes she's run off with her boyfriend. The question is--will Sylvia come back? And even more urgent--how will Casey fend for herself in their...