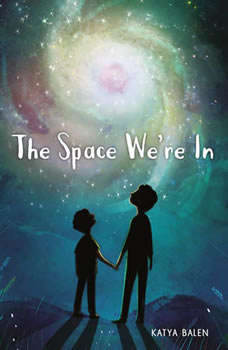 The Space We're In

Ten-year-old Frank has trouble navigating his relationship with his younger brother Max who is autistic.

Frank loves soccer, codes, riding his bike, and playing with his friends. His brother Max is five. Max only eats foods that are beige or white, hates baths, and if he has to wear a t-shirt that isn't gray with yellow stripes he melts down down down. Max is autistic and Frank longs for the brother he was promised by his parents before Max was born--someone who was supposed to be his biggest fan so he could be the best brother in the world. Instead, Frank has trouble navigating Max's behavior and their relationship. But when tragedy strikes, Frank finds a way to try and repair their fractured family and in doing so learns to love Max for who he is.

In her debut novel, Katya Balen uses her knowledge of autism and experience working with autistic people to create an intriguing and intense yet always respectful family story.