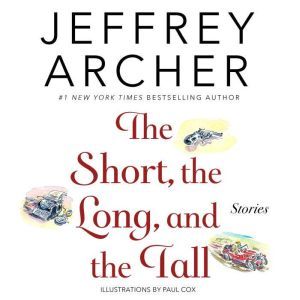 The Short, the Long and the Tall: Short Stories

New York Times number one bestselling author Jeffrey Archer is a master of the short-story form, creating classic tales beloved by his fans. Now the award-winning writer presents twenty of his most popular and feted short stories in The Short, The Long and the Tall.

Find out what happens to the hapless young detective from Naples who travels to an Italian hillside town to solve a murder and ends up falling in love; and the pretentious schoolboy whose discovery of the origins of his father’s wealth changes his life forever. Revel in the stories of the woman who dares to challenge the men at her Ivy League university during the 1930s, and another young woman who thumbs a lift and has an encounter she will never forget. Discover the haunting story about four men whose characters are tested to the point of death. Finally, a short parable about how pointless war is, and how decent people are caught up in the crossfire of their leaders’ ambitions.

This will be a must-buy for dedicated fans of Jeffrey Archer, and includes the following short stories:

Never Stop on the Motorway
Cheap At Half the Price
Who Killed the Mayor?
It Can’t Be October Already
Stuck on You
The Grass is Always Greener
The Queen’s Birthday Telegram
Clean Sweep Ignatius
The First Miracle
Caste Off
A Wasted Hour
Just Good Friends
Christina Rosenthal
A Gentleman and a Scholar
The Road To Damascus
Old Love
A Good Toss To Lose
One Man’s Meat
Endgame
Confession