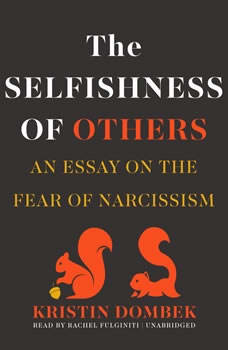 The Selfishness of Others: An Essay on the Fear of Narcissism

Theyre among us, but they are not like us. They manipulate, lie, cheat, and steal. They are irresistibly charming and accomplished, appearing to live in a radiance beyond what we are capable of. But narcissists are empty. No one knows exactly what everyone else is full ofsome kind of a soul, or personhoodbut whatever it is, experts agree that narcissists do not have it. So goes the popular understanding of narcissism, or NPD (narcissistic personality disorder). And its more prevalent than ever, according to recent articles in the New York Times, the Atlantic, and Time. In bestsellers like The Narcissism Epidemic, Narcissists Exposed, and The Narcissist Next Door, pop psychologists have armed the normal with tools to identify and combat the vampiric influence of this rising population, while on websites like NarcissismSurvivor.com, thousands of people congregate to swap horror stories about relationships with narcs. In The Selfishness of Others, the essayist Kristin Dombek provides a clear-sighted account of how a rare clinical diagnosis became a fluid cultural phenomenon, a repository for our deepest fears about love, friendship, and family. She cuts through hysteria in search of the razor-thin line between pathology and common selfishness, writing with robust skepticism toward the prophets of NPD and genuine empathy for those who see themselves as its victims. And finally, she shares her own story in a candid effort to find a path away from the cycle of fear and blame and toward a more forgiving and rewarding life.